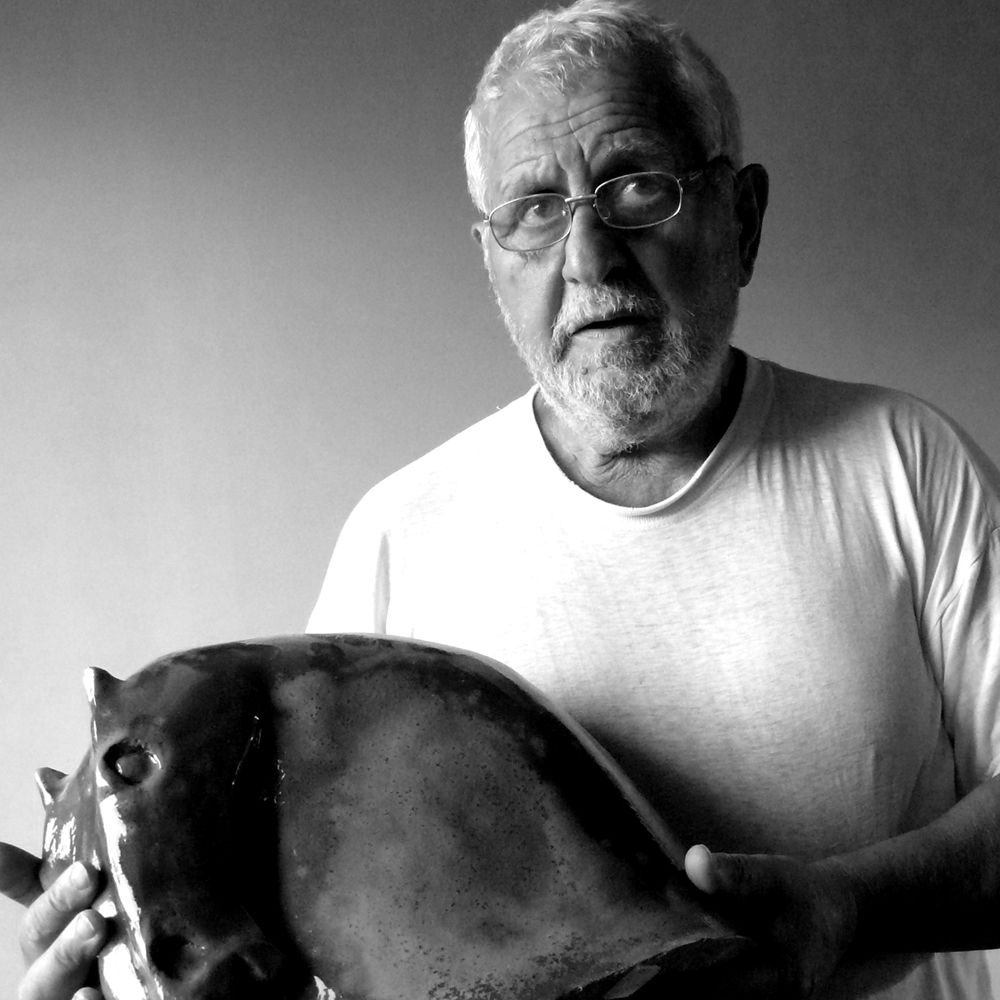 Born in Scandicci in 1943, Paolo Staccioli became involved in the art world at the beginning of the 1970’s, when he began to exhibit his paintings in the Florence area. But, his artistic vocation seemed to clarify itself twenty years later when the artist began a veritable formative process in Faenza, acquiring, over the years and with determination, the technical expertise that brought him to a language better suited to his creativity: sculpture and ceramics.
The apprenticeship rapidly lead to his first successes: after a first series of appearances in solo and group exhibitions, principally in the Florentine area, Paolo Staccioli suddenly captured the favor of the critics and collectors thanks to his graphic ability and freshness of execution. His expertise in transforming clay into form, as well as his ability to endow it with luminous vibrations and reflections of “luster ware” colors, interrupted only by graphic drawing marks, quickly brought Paolo Staccioli to his greatest creative season, uninterrupted, from the 1990’s up to today.
In ceramics, Paolo Staccioli found the fertile ground to express in complete freedom that creative vein that identifies him today as one of the artist who has created one of the most original and interesting formal repertoires in contemporary ceramic art.
From the first vases, where, for the first time, the first processions of horses appear (a theme to which the artist will always remain attached), lead by the mood of a dreamy and fairytale like imagination, Staccioli moved on to experimenting with new forms, modeled with lightness and irony; and thus appear the first harlequins, warriors, travelers, and dolls, that free themselves from the two dimensional surface of the vase becoming sculpture.
His creativity is now completely liberated, ready to find an outlet in the thousands of sculptural inventions and combinations that are created in the studio-atelier in Scandicci. His character and talent bring him to attempt a particular synthesis between what he has always recognized as his cultural heritage (the Etruscan world, with a formal elegance and the fresh expressiveness of pre-classical languages) and the observation of the modern world, arriving at the creation of an iconographic repertoire that goes beyond the limits of time, to deliver itself to modernity as an expression of playfulness and demystification, perennially putting his trust in the variety and multiplicity of linguistic declinations. Sustained by a continually fluctuating inventiveness, Staccioli amusedly watches the characters, dear to his imagery, emigrate from the sculpture’s pedestal to reappear aboard Argonaut ships and little carts, or mounted on a swing, suspended in a metaphysical balance.
Sculptures that, over the years, acquire an ever greater plastic mass, achieving a majesty without sacrificing immediacy; they are regenerated by washes of color that continually renew and reflect the development of the forms.
Over the years, Staccioli, indulging his by now consolidated sculptural vocation, dedicates himself to the exploration of the formal properties of bronze, a material, like ceramics, that finds a perfect correspondence with the formal, synthetic and stylistic structure of his creations.
The studio in Scandicci, where we find Paolo Staccioli working still today, is a hotbed in constant activity, an open worksite where it is possible to renew a sense of wonder in front of a clay model, multicolored steles, and sculptures longing to be shown on the privileged stages of an exhibition and in collections, that ever more punctuate Paolo Staccioli’s artistic and professional journey.